How to win a Free Pass?

You and your team can win a Free Pass to the NBC Sports Washington Trivia Challenge finals.

A Free Pass is an award given out to players or teams that gives them direct entry into the finals. This Free Pass is similar to an "Advance to Go" Chance card in Monopoly. You and your team don't have to grind it out at a weekly venue and through the semi-finals. Granted, you won't get the 10 bonus points for winning the semi-finals.

Free Passes are randomly added. They're given out throughout the trivia season and sometimes during the off-season. Basically, any time... but primarily during the Winter or Summer trivia seasons.

Free Passes are given away at select trivia venues during the Winter and Summer trivia seasons. You can find the latest schedule here, in addition to announcements on the website and social media.

Because we want you to have as many chances to make it the finals as possible. This may seem crazy, but our philosophy on trivia is "let's have fun" and "the more the merrier".

There are many ways to win a Free Pass:

If a team winning a Free Pass wins multiple Free Passes or a venue finalist spot, then the extra Free Passes will be awarded to the next eligible team. Thus, teams can only win one spot in the Finals. This is to ensure that teams don't horde Free Passes. Remember: "the more the merrier". Free Passes and finalist spots are awarded at the discretion of District Trivia and can be revoked for dishonesty and/or deception at any time. Please play well with others. 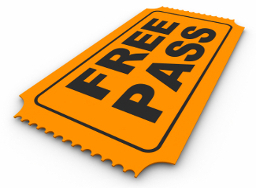